Ahead of a new documentary about Nasa’s ground crews, astronaut Jim Lovell talks about the team that saved his life during 1970’s ill-fated moon mission 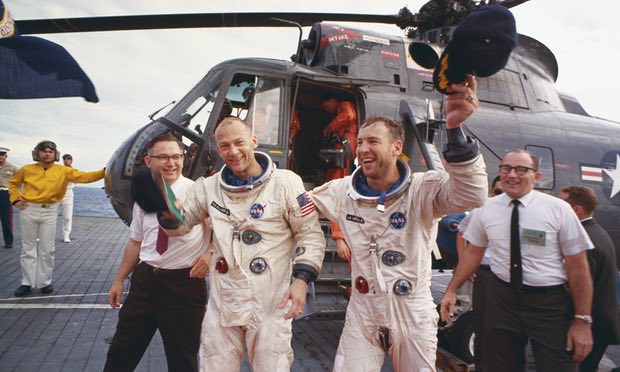 It is unlikely there is anyone who has more appreciation for the work of Nasa’s mission control than Captain Jim Lovell. His Apollo 13 mission was nearly destroyed when an oxygen tank in its main command module exploded. His spaceship was crippled and only narrowly coaxed to a safe return to Earth thanks to his crew’s heroic efforts – and the crucial aid of mission control.

Lovell was commander of Apollo 13 but was forced to abandon his mission’s planned lunar landing when the blast, which occurred 200,000 miles from Earth and two days into its journey in April 1970, triggered a major loss of power. Cabin heating stopped working, the water supply was disrupted and carbon dioxide began to build up. Lovell and crewmen Jack Swigert and Fred Haise were facing death.

These tribulations were recorded in Ron Howard’s film Apollo 13 (in which Tom Hanks played Lovell) and now form one of the key moments in the new documentary Mission Control: The Unsung Heroes of Apollo. The film includes several gripping moments in mission control’s history, including the nail-biting lunar landing of Apollo 11 in July 1969. But none of these scenes of high drama matches the tensions that erupted when Swigert called mission control on 13 April 1970 to report: “Houston, we’ve had a problem here.”

Oxygen was being vented into space and the craft’s electronics were failing. “We were facing all sorts of problems, but the one that really stood out was the danger of carbon dioxide build-up,” Lovell told the Observer. “We exhale carbon dioxide and if it is not removed from the air in a cabin it becomes poisonous in high concentrations and we were heading in that direction. But we had no power. It could have killed us.”

That is where mission control really came into its own, he said. “The crew systems people came up with an ingenious way to remove the carbon dioxide by telling us how we could jury-rig the craft’s lunar module [which was supposed to carry Lovell and Haise to the moon’s surface] with duct tape, plastic and cardboard.”

The Apollo 13 crew followed these instructions and, huddled in the lunar module for the next four days, were able to survive as the craft swung round the moon and swept back to Earth. “We got back thanks to mission control and to our own efforts,” he said. “It was, above all, great teamwork.”

Jim Lovell, who is now 89, was already an experienced astronaut when he commanded Apollo 13. He had flown on two Gemini missions and was an astronaut on Apollo 8 with Frank Borman and William Anders. They orbited the moon 10 times before returning safely to Earth on 27 December 1968. In doing so, they became the first human beings to fly to the moon. Apollo 8 was a problem-free flight in contrast to his next mission, Apollo 13. Indeed, Apollo 13’s failure to reach the lunar surface puts Lovell in a unique position: he is the only person to fly to the moon twice but never land on it. (John Young and Eugene Cernan flew to the moon twice but both landed on their second missions.)

“It was frustrating and very disappointing at the time,” Lovell recalled. “But over the years, I have come to the conclusion that the accident was the best thing that could have happened to Nasa. It had become complacent after a stream of early Apollo successes. Suddenly, there was a potential catastrophe that brought out the fact spaceflight is inherently dangerous. It also highlighted the wonderful leadership and mission control team that we had. For those facts, it was a blessing in disguise.”

This point is emphasised in Mission Control, which also reveals how young the ground staff were. The average age was 29 and many had come straight from college. “Yet they did magnificently,” Lovell said.

They are likely to be needed again, if the Apollo veteran gets his way. “We had hardly begun to explore the moon when the Apollo missions were cancelled. We now have a rocket [the Space Launch System] and a capsule [the Orion] in development and we should use those to go back to the moon with some frequency.

“We need to build an infrastructure on the moon before we can even consider sending people to Mars. People think Mars is the next big thing but we haven’t done the moon properly yet. We need to go back. And when we go back, we are going to need the best people in space but also on the ground, in mission control.”